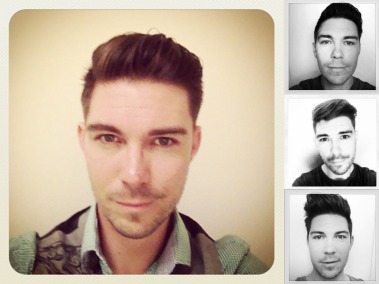 Ryan Henisey is an artist living in California. Ryan’s art has appeared in locations throughout the Golden State. His fine art work is greatly influenced by life in LA, the queer experience, social justice, and his early work as a public school teacher. The titular piece of his series #ArtToEndViolence was awarded and Award of Excellence in Watercolor at the California State Fair, 2015. In August, 2014, Ryan also won second place in South Bay Contemporary’s All Themes Considered, a national show juried by Scott Canty, former Director of the Los Angeles Municipal Art Gallery.

Ryan grew up outside of Los Angeles on the border to the Angeles National Forest, spending his youth drawing, writing, and making creations out of any material he could get his hands on.

Outside of work and his personal projects, Ryan is also a member and emeritus leader for Emerging Art Leaders Los Angeles, where he served three years as Communications Chair. Presently, Ryan works as a creative professional in Los Angeles, guiding internal change communications for a major travel and hospitality brand.

The views expressed here and in my art are my own and do not necessarily reflect those of my employer or any agency or organization that I may be affiliated with.